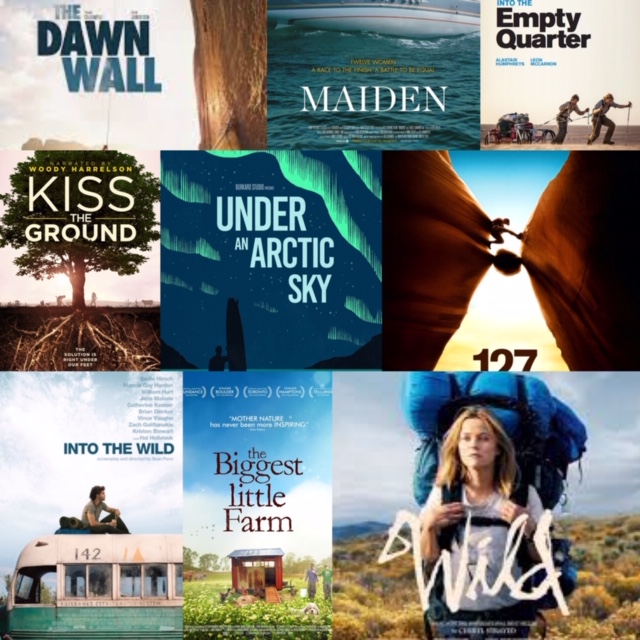 Travel Back to Basic

A serious documentary about the influence of humans on nature, an epic about long treks on the Pacific Crest or the Appalaichan Trail or a challenging expedition in the desert. There is something for everyone! Which do you choose?

I hope you enjoy watching! Are movies or documentaries not quite your thing and would you rather read a book? Then take a look here. If you prefer to listen to a podcast, click on this page.

2018 – Disney +. Documentary film by, among others, Jimmy Chin about climber Alex Honnold who conquered El Capitan (900 meters mountain wall in Yosemite NP) in 3 hours and 57 minutes in a free climb. Exciting and beautifully portrayed.

2015 – Pathé Home. Adventure film by Baltasar Kormakur, based on a true story. It is about the ascent by two teams of Everest in 1996. Journalist Jon Krakauer joins the teams to report. The climbers face terrible conditions. Will their persistence and strong will to reach the top win?

2019 – You Tube. Short film by The North Face about the ascent of Hilaree Nelson and Jim Morrison who ski down from the top of the Lhotse. Beautiful images!

2016- You Tube. If you enjoy movies like The Dawn Wall and Free Solo, this might be for you too. Mirror Wall is a short film by climber Leo Houlding about the ascent of the Mirror Wall, a 1200 meter high mountain wall in Greenland. He recently lost his best friend Sean Leary and became a father. The adventure continues to draw, but he seeks the balance between the danger that this poses and his responsibility as a young father. In addition, he takes an inexperienced team of young climbers to Greenland.

Under an artic sky

2018- Trailer You Tube. Long documentary by Alex Holmes about the first participation of a female crew on the sea sailing voyage of the famous Whitebread Round The World from 1989-1990. Tracy Edwards is the captain and with a lot of perseverance she brings her crew together and fights hard to participate in the competition with her own boat. The fierce journey is portrayed spectacularly and honestly. Even as a non-sailor, I thought it was an impressive film.

You Tube. Pretty American docu film about the running of 100 miles by two buddies. The suffering, the acidification and the joy are all portrayed.

Into The Empty Quarter

2013 – You Tube. Short, entertaining and honest film about Leon McCarron and Alastair Humphreys’ 1000-mile walking tour through the hot desert of the United Arab Emirates. An epic journey through a desolate and undiscovered area. With the necessary humor.

2013- Amazon. Documentary by Jennifer Steinman about a group of non-professional runners who try to run four ultramarathons. And if that’s not enough, four ultramarathons in deserts with an extreme climate such as the Gobi and the Sahara. Intense images! This film is not available yet in the Netherlands, you can watch trailer on You Tube, there you’ll find also a short film about the Desert Runners.

2020 – You Tube– short film by Chris Burkard again, who makes a bike ride across Iceland with four others. Wonderful adventure, enthusiastic and well portrayed.

The Road From Karakol

2013 – You Tube – short film about Kyle Dempster who finds his way on the bike in Kyrgyzstan and also packs some tops. Quaint and enthusiastic bird that Kyle. Who finds their way in a beautiful but challenging landscape.

Loved by All: The Story of Apa Sherpa

2018 – Vimeo. Every spring the beautiful Mount Everest area in Nepal attracts hundreds, thousands of climbers. The Sherpas live in the shadow of the highest mountain in the world. This beautiful short film is about the life of one of the Sherpas and allows you to look at the influence of all those climbers on the lives of these hardworking and often poor people from a different perspective.

A life on our planet

2020 –Netflix. Beautiful film by the legendary David Attenborough about his eventful life in and with nature. During his lifetime he has seen the wild nature and the use of the earth change drastically. The first part may make you sad, but the second part makes you activist. Focus on the future. We can still turn the tide, we must turn the t

River and The Wall

2019-Google Play/Amazon.. Five friends follow America’s border with Mexico, where Trump planted his famous wall. What effects does this action have on nature? They undertake the 1,200-mile trip with canoes, bicycles and horses.

2019 – Amazon by maker Matthew Testa about the effect of humans on nature. What can destroy people, but also what positive steps can people take?

2020 – Netflix. Docu by Woody Harrelson. Inspiring and honest story about the effect our use of the earth has. Scientists are also showing how we can stop climate change.

2018- Cinetree / Pathé at home. Attractively filmed documentary. Filmmaker John Chester, forced to leave the Los Angeles apartment, decides to buy a barren plot of land in California with his wife Molly. Here they develop an eco-friendly farm. In this project every animal and every plant has a role, everything hooks together. Despite setbacks, they manage to build a sustainable dream. It’s not just about the ups and downs of John and Molly but more than that. How do we deal with the earth and how can we do this in a positive way? Beautifully portrayed. That also works! You feel like starting your own farm

Also look at the canal of Patagonia and Red Bull, there you will find beautiful gems.

And then there are films from a little longer ago, real classics. Maybe you have already watched them and it is time for a repeat or you have been planning to do it for a while and it still hasn’t happened.

180C South – 2010 – Amazon. This film tells the story of Jeff Johnson, a climber and adventurer who sees old footage from a journey that Yvon Chouinard and Doug Tomkins took in 1968. Chouinard is the founder of Patagonia. The brand is named after the area and you get beautiful images of this in this film. Johnson is on the same journey. A quote from the film: “Fear of the unknown is the greatest fear of all, but we just went for it”. Nice movie!

2019 – Netflix – Not a movie, but an eight-part nature documentary. Made in collaboration with the World Wildlife Fund. From almost the same makers as Planet Earth, Blue Planet and Frozen Planet. With beautiful nature images and the fine commentary of David Attenborough. Wild animals are central. Each episode has its own theme.

2007- Pathé Thuis. Based on Jon Krakauer’s book of the same name about Chris MacCandless who decides to leave his old life and wander. After a trip through the US, he eventually ends up in Alaska, where he wants to live in nature cut off from humanity. You can see how that ends in the film. An impressive film about making choices in your life.

2010-Pathé Thuis.- . After the death of his son, a father decides to make the same pilgrimage that his son made. Their relationship was not really good, yet Tom decides to travel to France and finish his son’s journey. He meets various pilgrims, struggles with his grief and experiences that walking is mainly slowing down. A drama that would not appeal to hikers.

2014 – . After her Pathe Thuis death and a fresh divorce, Cheryl Strayed decides to go for a walk. She is down in the dumps and has no experience at all. But she is determined to complete 1,000 miles of the Pacific Crest Trail. You can see how she does that in this film.

A Walk In The Woods

2015 –Pathé thuis. Famous writer Bill Bryson, after many travels around the world, decides to look closer to home and starts hiking the Appalachian Trail. 3,500 miles through the American wilderness. His old friend Katz, a childhood friend with whom Bill had virtually lost contact, reluctantly goes along. The encounters with fellow hikers, the quarrels between the two men and the challenges in nature are widely discussed. Not a top film, but a pleasant viewer.

2010 – Pathé thuis.  For those who fall asleep at A Walk In The Woods, 127 Hours offers more excitement! It is the true story of Aron Ralston, a mountaineer who treks the hot mountains of Moab, Utah. He gets stuck with his arm under a rock in a deep cleft. He is alone, no one knows where he is…. How does this end?